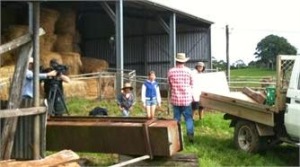 “Hello Anna, Just want to tell you a bit about our day up at the farm in Maleny for the commercial. It was great fun. When we got there, at about 7am in the morning, it was freezing cold. The crew were serving a warm breakfast but we had some before we left home. I got my makeup done when we got there and it was so much fun and then when farmer Phil arrived we said hello and talked a bit. Then we said hello to everyone else and talked for a while waiting for the crew to get everything ready. Once everything was set and ready to go we had to round up the goats into the shed so we could use them for the shoot. That was fun but I was kind of nervous because it was my first time doing it. There was one goat that had a very funny hair style… it looked like an old rock dude haha… we had so much fun doing that and then once we rounded them up we started shooting. We had to climb a fence into a hay bale and do it over and over again… it was tiring but very fun then we had to drive the ute down a dirt track and there was mud flicking everywhere… it smelt so bad at first because of all the cows but then we got used to it. After it all we had to drive to another paddock to shoot our last piece… that was hard because we had to do it over and over and over. It was all worth it though. We had so much fun. At one part my hair kept falling in my face and we had to mega bobby pin it… I think we used about 10 bobby pins? It was funny. Zac and I had so much fun and we would love to do it again. Mum got some great photos. We all had a great laugh throughout the day it was a blast. I think my talent might be acting. Thanks Anna (: “